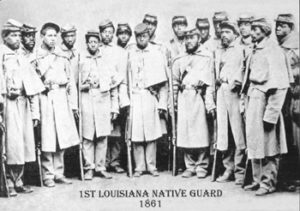 STUPID LIBTARDS kept saying in the internet that slaves where the reason for the civil WAR but i know better becuase in GEORGIA where i am from we where actally TAUGHT HISTORY and they werent and must half dropped out of SCHOOL and they went on THE WELFARE and FOOD STAMPS becuase they did not learn history in school. it was about STATE RIGHTS.

AND if your from the SOUTH YOU WHERE TAUGHT THAT most colored people were fine with being slaves and back than their was no black on black crime and many were very happy and a bunch of them joined the CONFEDERATE ARMY to fight for the SOUTH like in the picter i half above with the 1st loisiana native guard and their were blacks fighting for the SOUTH! LIBTARDS keep showing fake documents they say are in a congress libary that shows states said the main reason was SLAVREY and it was not because i learnt in school it WAS NOT and my family has handed down storys about are HISTORY from genration to genration because THEY WHERE THEIR!!!! THE WAR was about STATES RIGHTS not SLAVES because the NORTH wanted money because they were BROKE and the SOUTH were RICH and they wanted MONEY FROM the SOUTH. and that was the real reason for the CIVIL WARS. it was ABOUT STATE RIGHTS!