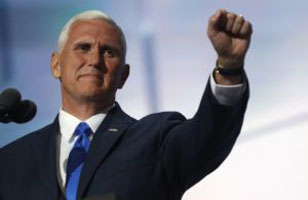 mike pence went to a brodway show with his daughter and he and his daughter were their for the bordway show and they cast read a nasty note about him and than the crowd sayed nasty things to his daughter and that is not right and that needs to stop now enough is enough. i heard it was because he nows how to make GAY people not be GAY and they where made about that becuase they want to stay gay because there against GOD. and his daughter was just their for a show and not the time for them to attack mike pence in front of his daughter because they want to sin. and i think some of them were BLACK LIFES MATTER protestor people who were paid by GEORGE SOROS to be there and PROTEST.